“Mankind Is No Island” by Jason van Genderen

I was introduced to a short film recently that is original and unforgettable: “Mankind is No Island”, Directed by Jason van Genderen. My girlfriend had been shown it by a foreign student, who is learning English, and they both were brought to tears by its clear and universal message of empathy towards the homeless in our communities.

van Genderen uses images of words found on street signage throughout New York and Sydney, captured on a cell phone camera, to narrate his story. The films soundtrack consists of a haunting piano composition.

“Mankind is No Island” is a 3 ½ minute film that won the top prize at Tropfest NY 2008 this past September. Tropfest is the world’s largest short film festival and is held every spring in Sydney and fall in New York.

Tropfests’ mission is to “continue to develop the most exciting forum in the world for audiences to come together and celebrate premium short films; and to continue to offer young filmmakers a bigger and better platform from which to launch their professional careers.”

According to the official announcement of the winner for Tropfest NY 2008, the entire budget for “Mankind is No Island” was $57. Very impressive.

Listen to an interview of Jason van Genderen regarding his film.

Here is a presentation given by Mike Masnick, President & CEO of Floor 64 and Editor of TechDirt, this past January at the 2009 midem Conference held in Palais des Festivals Cannes.

Masnick dissects and analyses the current business model being used by Trent Reznor of Nine In Nails and makes a case of how Reznor is creating the business model for the future of the music industry. Despite allowing free high quality downloads of his music and concert footage, encouraging fans to alter his work without fear of legal action, Reznor manages to make money. In essence, Reznor has created a business model that works.

Masnick sums up Reznors business model in a simple formula:

and he offers two explanations of this formula:

“…rather than focusing on complaining about pirates and worrying about new technologies, (ed. Reznor is actually) focusing on how to put together a business model that works.”

The high level take away from this is that Reznor continues to connect with his fans no matter what the cost of his product and achieves this by always insuring value in his communication with them. 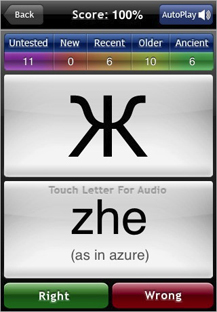 Recently I decided to try and learn a new language, Russian. After several failed attempts at Language CD’s & “for Dummies” books, the Cyrillic (кириллица) alphabet doesn’t translate well into print, I stumbled across an iphone application; Russian Alphabet by Andre Khromov.

One could say that this is just no more than a digital version of flash cards but I think this is pretty ground breaking for language education. Its functionality allows you listen to a voice pronounce the letter, lets you rate your answers and with the help of a progress tracking system, repeats the letters you are having trouble learning.

I can honestly say that I have learned more from this $1.99 application than the $70+ I invested in CD’s and books. Also, I can now say I’ve been introduced to the mystery which is the Russian letter “Й”, pronounced “ee kratkaya.”

Like I said, the Cyrillic alphabet doesn’t translate well into print.

To learn more about the iphone application Russian Alphabet by Andre Khromov, visit the itunes store.